The Case of Will. U.B. Mine 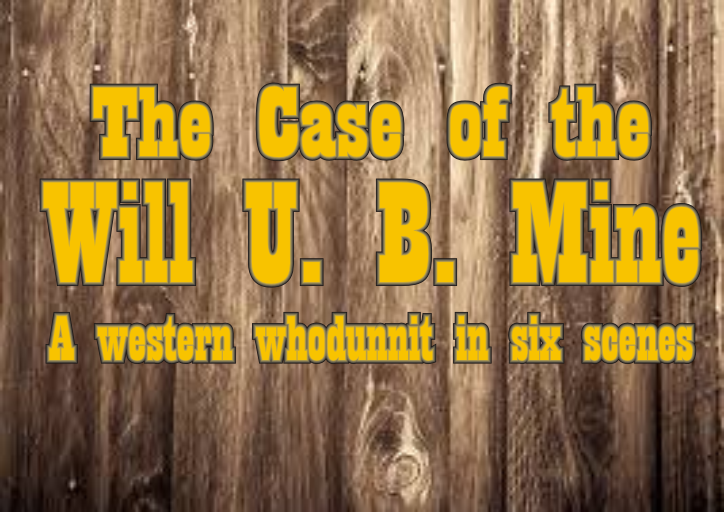 It’s 1866 and all of Prairie Town is ready to celebrate Founder’s Day, a day to thank their benefactor, William Ulysses Brown! The man who practically built the town with money he made from his secret gold mine. But when a shot rings out, Old Man Brown drops dead at the festivities. And no one is shocked to see that the gunman is none other than Dallas Sanders, wealthy son of Old Man Brown’s biggest enemy, Col. Chick Sanders. But is he really the killer?

Marshal Marshall races against the clock to learn who really killed the towns most beloved resident in The Case of the Will U. B. Mine.

(From the opening scene of The Case of the Will U. B. Mine)

We are at the town square of Prairie Town. It is decorated for a hoedown with bales of hay, potted plants, especially sunflowers, and several barrels and a wagon wheel. There’s a large banner across the back of the stage that says, “Salute to Will Ulysses Brown – Prairie Town’s Benefactor.” Upstage left is a large wooden easel. Down left are several hay bales and potted jugs of Colonel Sanders’ homemade corn whiskey.

Col. Sanders comes on stage carrying a couple more jugs of corn whiskey. He is humming “Dixie” to himself as he sets about inspecting his collection of jugs of liquor. Eventually he selects a jug, pulls the cork, and takes a hearty sniff. At that moment, Thirsty Waters and Grunt Work enter carrying a large veiled portrait.

GRUNT WORK: (Obviously anxious to set his burden down) Where you want this, Colonel? It’s heavy.

COL. SANDERS: Well let’s see here, Grunt, there’s bales of hay, barrels, wagon wheels and an easel. Given this collection of odds and ends just where do you think a large framed picture might best belong?

GRUNT WORK: (Looking about) Is this a trick question. Boss?

COL. SANDERS: Just set it down on that easel, Grunt. I swear if brains were dynamite you wouldn’t be able to blow your nose.

They set the framed, veiled portrait down on the easel.

THIRSTY WATERS: No need to be mean, Colonel. We’re just trying to help.

COL. SANDERS: You can help by being careful with that portrait, Thirsty. We’re hanging it up in City Hall just after the celebration. Now, leave me alone. I am mighty busy. You boys have no idea how to throw a hoedown.

GRUNT WORK: Doesn’t stop me from trying every Saturday night (He laughs) Am I right Thirsty? (Laughing as Thirsty and Sanders just stand staring at him until he stops laughing.) What?

THIRSTY WATERS: (Uncovering portrait of Will U. Brown as he speaks.) I don’t get you, Colonel. What’s with the big party you're throwing for Will U. Brown? Everyone in town knows you hate that old buzzard.

COL. SANDERS: Nonsense. Whatever gave you that idea?

THIRSTY WATERS: Maybe the time you tried to set fire to his back forty.

GRUNT WORK: Or the time you tried to push him off that cliff.

THIRSTY WATERS: Or the time you tried to poison his well.

GRUNT WORK: Or the time you tried to shove a rattlesnake down his pants.

COL. SANDERS: Rumors, boys. Those are just ugly rumors. William Ulysses Brown is a true visionary. Where would this town be without him?

THIRSTY WATERS: That’s true enough. Just look at the town square. (He begins pointing out structures.) The Will U. B. Courthouse. The Will U. B. School House--

THIRSTY WATERS: The Will U. B. Waffle House.

GRUNT WORK: The Will U. B. Candle Shoppe. (Pronounced Shop-ie)

THIRSTY WATERS: The Will U. B. Putt-Putt Range.

GRUNT WORK: The Will U. B. Home for Easily Aroused Women of Low Morals.

THIRSTY WATERS: I LOVE that place.

GRUNT WORK: Mighty fond of it myself.

COL. SANDERS: (Clears his throat.) You know, boys, I’ve contributed quite a bit to this town myself.

COL. SANDERS: That’s enough, boys. Obviously, Will Brown deserves this little celebration for all he’s done for Prairie Town. Now, get back to work. The hoedown starts at sundown and there is lot to get settled before everyone arrives. (Colonel Sanders exits.)

THIRSTY WATERS: (Alone he approaches Grunt Work.) Hey, Grunt. Can I ask you something?

THIRSTY WATERS: Well . . . we were talking about all the things this town owes to William Ulysses Brown. I was just wondering about the big thing that made it all possible.

GRUNT WORK: What are ya’ talking about?

THIRSTY WATERS: No, you idiot. The gold mine! The Will U. B. Gold Mine! The single richest gold mine in the entire state! Only no one knows where the damn-blame mine is. Only Will Brown knows the secret location. “It’s somewhere in the Flint Hills” is the only thing that ol’ miser has ever divulged. He says the mine location is a “secret necessity.” But word has it that your boss knows where this gold mine’s secret location truly is. So I’m asking, is it true? Does Colonel Sanders have the Secret Necessity?

GRUNT WORK: Look, all I know is that stupid riddle Will Brown used to recite when he had a snoot full.

THIRSTY WATERS: Ya’ mean; “Of gold and riches, I’ve taken plenty;
And yet my mine is still not empty;
It belongs now to my girl you see;
For I’ve put my mine well behind me.”

GRUNT WORK: Course, I do. Whole town knows that damn riddle. But no one knows what it means. That old rhyme is harder to figure out than personal hygiene products.