The Case of the Pocket Park Plot 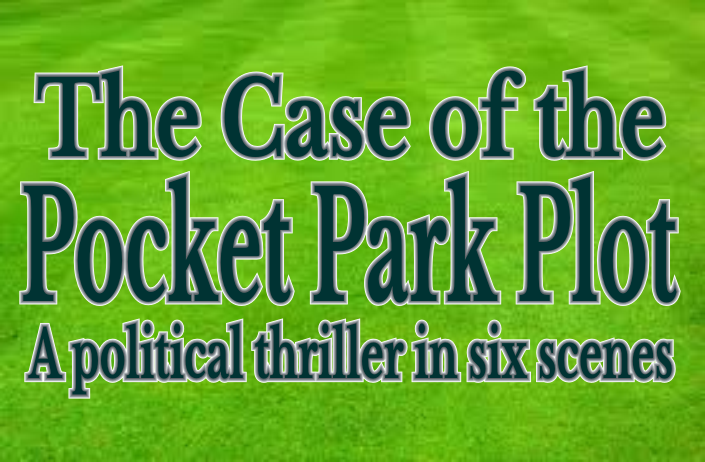 Mayor Nays and his wife Holland Nays are dedicating a new pocket park downtown, but not everone’s happy about it. Deputy Mayor Phil A. Buster sure isn’t. And neither is Judge Mint! When the local psychic and known crackpot Madame Vail Lifts predicts that death will be the outcome, no one believes her. And when the Nays drop dead together, all eyes turn to Detective Anita Clue to solve the crime.

It’s a political whodunit with bodies piling up almost as fast as the jokes in The Case of the Pocket Park Plot.

Lights reveal an elevated stage assembled for the public dedication of a new pocket park in downtown Topeka. It is early and a crowd has not yet assembled. There are six chairs set up in the back for the dignitaries that are yet to arrive. Each chair has a name across the front. One of the chairs is set far away from the others. This chair has the tag Phil A. Buster, Deputy Mayor. A lone microphone on a stand is center and a giant scissors with a roll of red ribbon sits to the right, waiting to be used in the dedications.

As the action begins, Medea Leaks, press secretary for the mayor crosses, on stage. She carries multiple bottles of water, pulls a cooler and several small fans. She begins setting fans and water at each chair. Deputy Mayor Phil A Buster comes on stage next. He is a surly man with a huge chip on his shoulder. He crosses to the chair with his name on it with disgust.

BUSTER: (Pointing at his chair) What the hell is this?

BUSTER: (Crossing to Medea) Don’t get clever with me, Ms. Leaks. I’m Deputy Mayor of this city. Mind telling me why my chair’s way off to the side? I should be front and center.

MEDEA: Sorry, don’t start. Deputy Mayor Phil. You know that the arrangements of the chairs are all made by the mayor himself.

BUSTER: You mean as Mrs. Nays made them. We all know who really holds the power in this town.

MEDEA: I’m just doing my job here, Deputy Mayor. Here, read this. (She hands him a sheet of paper.)

MEDEA: The new speaking order. Judge Mint will welcome the crowd and introduce Mayor Nays who will dedicate this new pocket park in memory of the great chess champion from the Oakland neighborhood, (she reads her notes) . . . a Mr. Hamilton A. Rye.

BUSTER: And when do I make my remarks?

MEDEA: You don’t. In the interest of time, Mrs. Nays has cut your speech from this morning’s program.

MEDEA: She wouldn’t dare? Do you not know this woman? I once saw her punch a parade cop’s horse. Knocked it out cold. She dares. But she did say if you want to speak you can do so as the crowd starts to disperse. She said that nothing would clear the crowd faster.

BUSTER: So that’s it. Nothing for me. Just Mayor Nays goes all over Ham Rye. That’s a fine pickle I’m in.

BUSTER: Why do you to this, Medea?

MEDEA: Do what, Phil?

MEDEA: Do what, Deputy Mayor Phil?

BUSTER: Do that woman’s bidding. You know she’s the reason you didn’t get a seat on the City Council. Thanks to her, you’re nothing but a lowly press secretary instead of a political force of your own. Doesn’t it make you want to—

MEDEA: (Under her breath) Kill the old bag?

MEDEA: Nothing. Never mind. Just follow the program and everything will be just fine.