The Case of the Cold Student Body 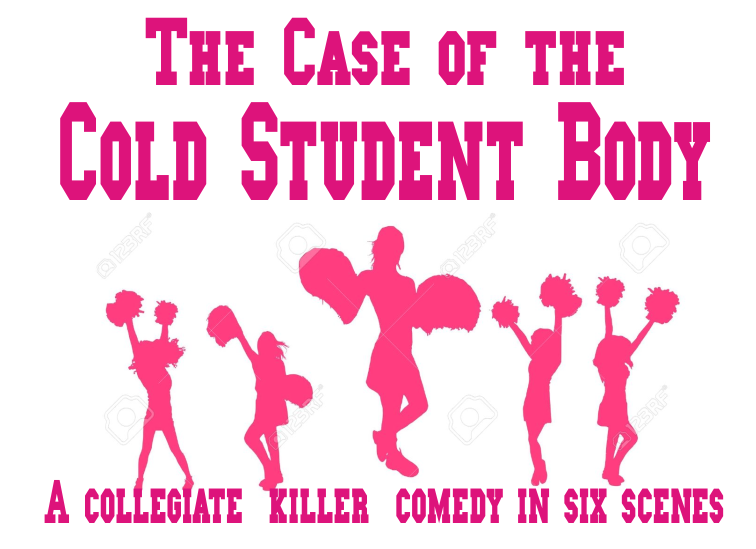 It’s time to celebrate the new in-coming freshman class at Wattswith U., a charming college. And what better way to welcome this class than with a thrilling pep rally featuring the cheerleaders of the Fighting Pink Possums? That is until the Pink Possum mascot drops to the ground. And when they remove the head they don’t find the sole male cheerleader, Chick Magnet, inside. Instead they find their dean, Dean Martin . . . and he’s dead!

There’s no shortage of suspects either. Is it the music professor, Doe Raymie? The entomology professor, Dr. Buzz Honeyfield? Or maybe one of the beautiful cheerleaders, Sissy, Missy or Chrissy. Laughter abounds as The Case of the Cold Student Body starts to unravel!

As lights rise, three cheerleaders storm the stage. They are Chrissy, Missy and Sissy. They are perky and exuberant. They get the crowd excited and clapping along as they jump and shout across the stage. Once everyone is worked up, they take their positions across the stage to start the opening cheer. Chrissy is center.

CHRISSY: (First) We are the mighty --

CHRISSY: (First) And when we fight hard

CHRISSY: (First) Our team is awesome!

MISSY & SISSY: (In unison) And when we fight hard

MISSY & SISSY: (In unison) Our team is awesome!

CHRISSY, MISSY and SISSY: (In unison) We’re ready for battle! Did you hear what we said?
And when we play football, we won’t play dead!! (YEAH! WHOO!)

The cheerleaders jump up and down and shout until Chrissy looks off stage, angry, and shouts at someone.

CHRISSY: That’s your cue, you idiot! You come on stage immediately following the cheer! It’s not difficult!

Suddenly a large pink possum mascot staggers up the stairs to the stage. He starts to jump about the stage as the cheerleaders join him, trying to work up the crowd. After a few moments of gyrations the pink possum drops to his knees and begins grabbing at the head, trying to pull it off.

MISSY: What’s he doing? I don’t know this cheer.

CHRISSY: What are you doing, Chick? We don’t get on our knees at a pep rally. Never show weakness!!

We hear muffled noise from inside the costume as Chick continues to pull at his head and neck.

CHRISSY: (Put out) What are you saying, Chick? You know we can’t hear you.

CHRISSY: Stop shouting at the possum like that, Missy. He’s not that foreign exchange student in your Econ class. Take his head off, Sissy, so we can see what the idiot wants.

Missy and Sissy unsnap the back of the head of the possum and pull it off over Chick’s head. He’s obviously sweating and takes a huge breath once his head is free.

CHICK: (Big breath) Ohhh, thank the Lord. Oh, my God. I thought I was going to suffocate. Who designed that costume? The Marquis de Sade?

MISSY: Markie who? Is he that French guy in the Epsilon house?

SISSY: He’s French? That explains why he kisses like that.

CHRISSY: Will you two shut up? I designed that costume, Chick. You got a problem with it?

CHICK: Yeah, I got a problem. There’s no way to get the head off in an emergency. I’m one random fart away from accidental asphyxiation.

SISSY: Ohh, poor Chick. You want me to get you some water, baby?

CHICK: Look, I’m sorry, sweetheart, but this new possum suit is impossible. It’s almost air tight. I can’t see. And it’s so hot. I had to strip to my birthday suit in here just to stay cool.

MISSY: (Quietly to Sissy) Now I want to crawl inside that costume.

SISSY: (Quietly to Missy) I’ll help you chew your way in.

CHRISSY: (Curtly) Look, Chick. The Pep rally starts in less than ten minutes and we’ve yet to get through the whole routine. So how about you man up and get your head in the game?

CHRISSY: (cutting him off) That’s right. Man up.

CHICK: What’s that supposed to mean?

CHRISSY: It means be a man. A real man. Now, put on a pink animal suit and dance!