The Case of the Murdered Heel 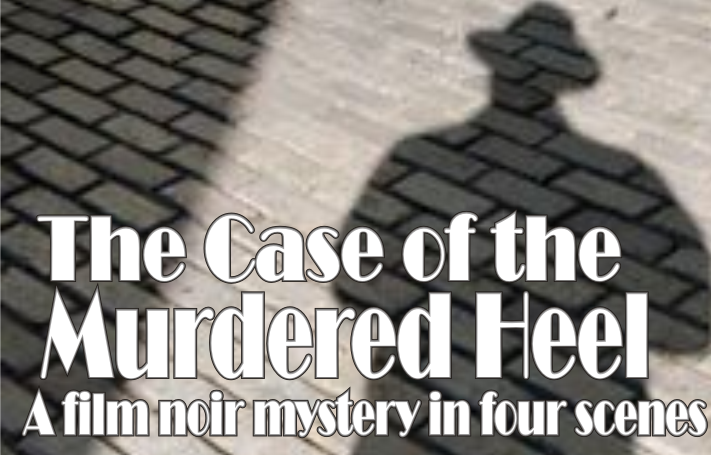 It is a cold day when she walks into his office, a femme fatale with a big problem. She needs to find the famous slogan creator Slick Johnson, and only a gumshoe like Detective Sparky could possible find him.

Join us at the infamous speak-easy, the Ad Club, as this film noir spoof finds our fearless detective matching wits with the advertising world in The Case of the Murdered Heel.

The Case of the Murdered Heel from Berkeley Square on Vimeo.

NOTE: The Case of the Murdered Heel has been adapted for the stage from a short film.

Opening Scene of The Case of the Murdered Heel

Lights rise on a small rolling unit that serves as Detective Sparky’s Private Investigator’s office. This is a small rolling platform with a row of windows upstage. There are weathered blinds, half open on the windows revealing a Detective Sparky Private Eye logo that is backwards in the glass. A file cabinet populates the SR corner of the wagon and a door with a glass top is seen on the SL side. A large wooden desk sits center, against the windows. Detective Sparky sits on a rolling wooden chair in front of the desk. He has a loose tie around his neck, a dress shirt with rolled up sleeves and worn dress slacks. His suit coat hangs on the back of his chair and a fedora with a raincoat hangs on the SR side. He drinks from a flask as a voiceover of his voice is heard.

VO: It was a cold day in T-Town. The kind of cold that reminds a man that he has nipples. Business had been real slow for quite some time. The only case I’ve had in a week was a case of warm Michelob. I was trying to decide on supper. I could either have the pad of butter I found in my brief case or the three packs of Sweet-n-low I had on my desk. That was when she walked in . . .

The door opens and Doll Face enters. She wears a large floppy hat and a form fitting dress. She is immediately enticing.

DOLL FACE: Excuse me. I’m looking for a detective.

VO: The dame was beautiful. But I knew instantly that she was trouble. She was the kind of dame with worry written all over her face.

She takes off her hat and we see the word "worry" written across her forehead.

DET. SPARKY: (Crossing to Doll Face) Yea, I’m a detective. Name’s Sparky. Detective Sparky, P.I. It stands for Probably Illiterate, but don’t let that bother you. Here, let me help you with that.

Det. Sparky wets his thumb and starts cleaning her face. We hear a wet sound, as if someone is cleaning glass with a rag as he vigorously cleans the woman’s face.

DET. SPARKY: (Stepping back) There. That should do it.

DET. SPARKY: A little trick I learned from my mother outside of church one Sunday morning. So what can I do for you, Doll Face?

DOLL FACE: How did you know my name was Doll Face?

DET. SPARKY: Just a little detective work. (Ripping a sticky label off her blouse with the words, "Hello My Name Is Doll Face") You were wearing this!

DET. SPARKY: (Sitting and shaking his flask) Mind if I join you?

DOLL FACE: (Sitting across from the detective) You see, Detective . . . I’m in advertising.

DOLL FACE: I know. I told my father I’m a stripper so he wouldn’t feel the shame . . . anyway, I have a very difficult client and he wants a slogan for his product and I’m drawing a complete blank.

DOLL FACE: (Holds up a box with a picture of a kitten wearing a poncho on the cover.) Kitten Ponchos. He imports them from Columbia.

DOLL FACE: (Cutting him off) Please don’t finish that sentence. Detective, you don’t understand. I don’t want you to come up with a slogan. I need you to find the finest slogan writer to ever work in advertising. The great Slick Johnson.

DET. SPARKY: Slick Johnson. He’s the most hated man in advertising. I heard he went in to hiding because everyone in the ad world wanted him dead.

DOLL FACE: True . . . but the man is brilliant. He was the one who came up with Plop-Plop, Fizz-Fizz.

DET. SPARKY: I get two dollars a day, plus expenses. And at the end of the case I get forty dollars: half of it in cash, the other half in hamburger meat.

DET. SPARKY: Let’s get going. (He rises. She follows him up.)

DOLL FACE: Where are we going?

DET. SPARKY: The most disgusting underbelly of this town. The Ad Club. If anybody knows where to find a Slick Johnson, it’s people in the Ad Club.

DOLL FACE: So it’s off to the Ad Club then?

DET. SPARKY: Not right away . . . first, we need to strike this set and pretend we’re walking across town.

They both rise, step off the platform and begin to roll it off stage as the lights fade.

Your quick wit and story telling talents shine over and over all through the production.